A big part of my job as a real estate agent is helping people think through where they want to live. Historically, mega-trends have influenced that decision. For example, workers moved to mill towns for jobs in the Industrial Revolution, refugees fled pogroms and poverty in Eastern Europe, and Americans moved to the suburbs with mass produced automobiles. So what’s next? What will change where people want to live in the future? Here are some bold (wild?) predictions about changes that will be wrought by driverless cars, virtual reality, climate change, and artificial intelligence.

1. Population Diffusion made possible by technology

You can live anywhere.

Self-driving cars and virtual reality are two nascent technologies that will make it less inconvenient to live far from where you work. This will usher in a new wave of movement away from today’s high rent cities, and fuel the rise of satellite towns that compete for residents.

As driverless cars become dominant on the roads, we can expect, among other benefits, sharply reduced traffic and accidents, which means your commute will take much less time (and be safer). It will also be more pleasant, as you can use the time for other activities, as you would on a train. I know from working with my clients that one of the main considerations for many people when choosing a town is their commute time. The time savings from self-driving cars will expand the consideration set of towns for many prospective home buyers, who will look farther afield. For example, those who work downtown and now limit their search at the Newton border will consider Natick. Those who drew the line at Natick might consider as far as Shrewsbury or even Charlton. An historical analogy would be the advent of the automobile in the 20th century. 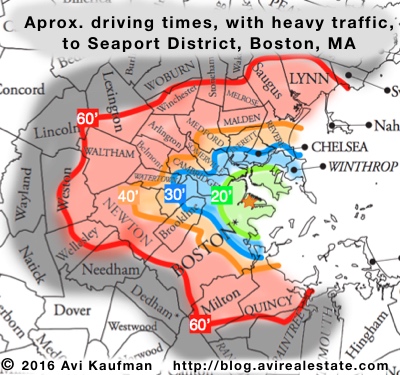 Additionally, as virtual reality becomes better and better, there will be less need to physically be present to begin with. From your home office, or anywhere with a strong internet connection, you’ll be able to interact with colleagues and clients, and it will feel just like being in the same room. A critique of remote work today is that you miss out on the serendipitous interactions that inevitably arise from concurrent physical proximity. But the future virtual reality will be good enough that it will be a close substitute. At the very least, it will reduce the number of times that some workers must report in person.

Certain professions, such as computer programmers, already make heavy use of remote work, and are primed to lead the way on virtual commuting. I know a computer programmer today who works for a company in Boston but lives on the far western edge of the state, in picturesque Great Barrington, and uses various technologies to collaborate closely with his colleagues. I know another who codes for a company in Ottawa but lives in Rome! Nevertheless, I think towns like Brookline will continue to generate strong demand, with their combination of good schools, parks, and walkable commercial areas.

People will generally move northward and away from danger.

Global warming, which at this point is apparently inevitable, can be expected to induce massive global and regional migrations. Arable land may shrink and food shortages will be more common; the range of mosquito-borne diseases, such as Zika and Malaria, will expand; new diseases will emerge; powerful storms may arise more often, destroying key infrastructure; and low-lying areas will fall below sea level.

We can expect these disruptions to spur mass migrations from the worst affected areas, many in developing countries, to safer areas. An historical analogy would be the mass migration of Goths into the Roman Empire starting in the 4th century (caused in turn by the migration of the Huns into their territory, possibly due to climate changes), the mismanagement of which is cited as a contributing factor to the fall of that empire.

We don’t have to go that far back, though, to find a relevant example. Global warming is blamed for a drought in Syria in 2006, the worst in 900 years, destabilizing the country and setting the table for the civil war which followed. Unfortunately, we can expect further and more severe migration in the coming years. Whether this will result in a new age of cooperation and compassion, or drive us toward isolationism and regionalism, is unclear.

The Northeastern US will suffer the effects of climate change, but perhaps more manageably relative to other regions. By mid-century, the climate here could feel more like today in North Carolina, and our winters will be less cold. Even within the US, there will be population movement northward as southern temperatures rise.

Advances in artificial intelligence will automate and eliminate human jobs (eventually). It’s true that in previous technological leaps, such as in the Agricultural Revolution and the Industrial Revolution, as jobs were lost, other, new jobs, were created. But this one is different: a time is coming when almost anything productive a human can do, a computer can do better and faster. It’s not imminent, but it is likely some day.

So, what then will all the humans do? Will we return to the Original Affluent Society of our hunter-gatherer ancestors, with a 3-5 hour workday? Will we be able to coordinate a society without poverty?

If work becomes optional, then where would you choose to live? I imagine we’ll put a renewed emphasis on being near family and friends, on spiritual needs, and on recreation. Those choices will influence where we want to live. It might also mean that people will increasingly live in less permanent locations. Many retirees today already split their time between a warm climate in the winter and near their families the rest of the year. Imagine that you were a retiree your whole life: perhaps you’d adapt a nomadic or semi-nomadic lifestyle.

Predicting the future is, by its nature, hard to do. What do you think will affect where people live in the future? What big ideas are missing from this blog post? Space colonization? Exponentially longer lifespans? Armageddon? The 2016 Presidential Election?

Facebook Tweet Email
Questions? Email me and let's set up a time to discuss your real estate needs.
AVI KAUFMAN is a top broker who lives in Brookline, Massachusetts and works there and surrounding communities, assisting buyers and sellers of residential property. He is building a unique practice dedicated to serving the best interest of his clients - see how he's different.

Check out these other posts

The case against Local Historic Districts

Why we should stop requiring parking minimums near public transit

Back to all posts